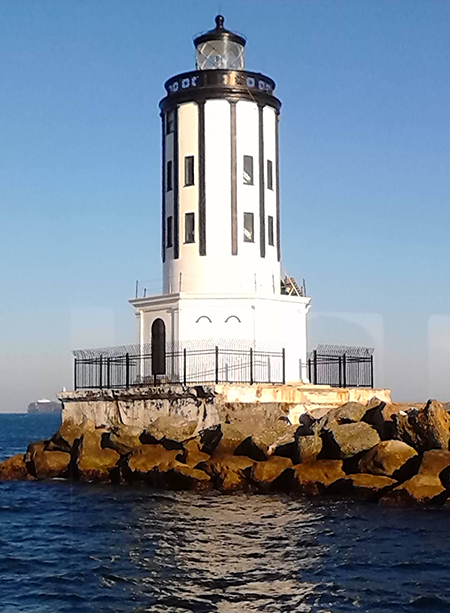 This historic lighthouse has marked the entrance to the port since 1913. The breakwater is 9,250 feet long and contains nearly three million tons of rock, brought over from Santa Catalina Island. Designed differently than any other California lighthouse, Angel’s Gate is situated on a forty-foot concrete square. Built to withstand rough seas, the framework is structural steel, with steel plates to the second floor. The lighthouse is so well-constructed that, after a five-day storm in 1939 sent violent seas smashing into the building, the 73-foot Romanesque tower leaned slightly toward shore, but still stood defiantly, as it does to this day. The lighthouse was automated in 1973, thus eliminating the need for keepers.

The two note blast of its foghorn every thirty seconds is a familiar sound to local residents. Mariners entering Angel’s Gate are guided by the lighthouse’s rotating green light. Whenever a deep sea vessel arrives on her maiden voyage in Los Angeles Harbor, the master is presented with a plaque etched with the likeness of the light, an official greeting from the City of Los Angeles, and the lighthouse that watches over the entrance to her harbor.

On October 27, 2013 the lighthouse celebrated its 100th birthday after an extensive renovation. The lighthouse is not open for walk through tours however harbor tour boats are your best opportunity to get a close-up view. From land, walk to the end of the fishing pier at Cabrillo Beach for a view. Due to extreme danger walking on the breakwater ridge is not allowed. Other locations for a panoramic view would be at the lookout at S. Pacific Ave. and Shepard St. or Lookout Point Park at Gaffey St and 37th St.