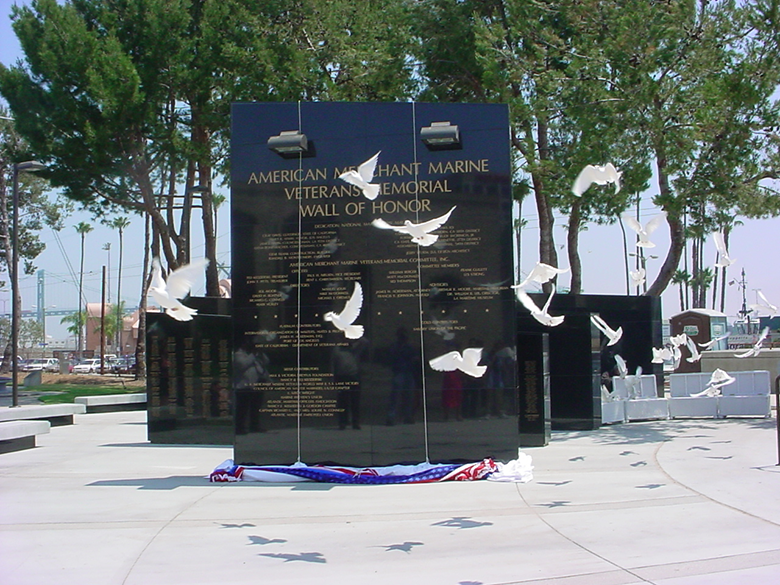 This striking memorial, the first national memorial to merchant seamen in the United States, was commissioned by a group of local seamen to honor merchant marine veterans from all wars. At the height of World War II, there were 215,000 merchant mariners, including many teenage boys too young to enlist in the military, and men classified as 4-F, yet caught up in the patriotic fervor that swept the country after the Japanese attack on Pearl Harbor. According to official statistics, more than 6,795 civilian merchant seamen lost their lives in World War II for a causality rate of 1:32 (the highest casualty rate of any service); 600 were taken prisoner; and more than 650 of their ships were sunk. Unofficial statistics cite 8,651 merchant mariners killed at sea, 11,000 wounded, 1,100 died from their wounds ashore, 604 taken prisoner and 60 died in prison camps.

The bronze statue depicts two merchant seamen climbing a Jacob’s ladder after making a rescue at sea. The designer of the statue was the Wilmington, CA sculptor, Jasper D’Ambrosi. His creation of the original design was finished and accepted in early 1986. However, D’Ambrosi died August 1 of the same year before starting the final clay model. The enlargement was done by his sons, Marc and Michael as a tribute to their father. The Jacobs ladder was cast at the family foundry, Arizona Bronze, in Tempe, AZ in 1987. Although the land for the memorial was donated by the City virtually all of the $700,000 for the project came from private donors.

A bronze plaque on the memorial states, “The United States Merchant Marine has faithfully served our country in times of war and peace hauling cargo to every corner of the world. This Memorial is dedicated to those brave men and women of all races, creeds and colors who answered that call to serve.”

Every May 22 there is a National Maritime Day Observance and Memorial Service with local dignitaries speaking and honoring the American Merchant Marine Veterans who bravely served their country. On May 22, 2003, phase two, the five “Walls of Honor” were unveiled and dedicated as white doves were released in a very moving tribute.