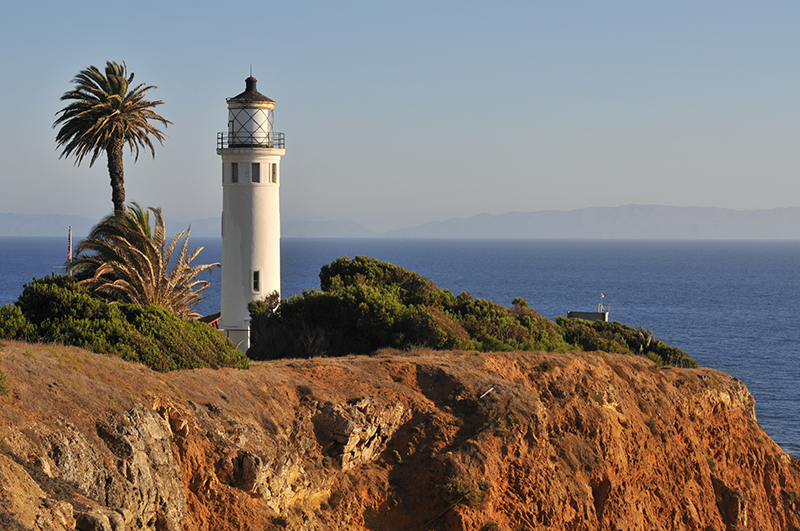 Situated on eight acres, this historic lighthouse was erected in 1926, in response to a petition from ship’s masters who deplored this disastrous stretch of costal waters. The two million candlepower white light is developed from a fifteen-watt bulb focused through a handcrafted five-foot lens. Made in Paris in 1886, the lens saw forty years of service in Alaska before being brought to the Peninsula. The 67 foot high tower is perched on a cliff, resulting in a light source 197 feet above sea level, which can be seen twenty miles at sea.

Point Vicente was manned by civilian lighthouse keepers until 1939, when the U.S. Coast Guard became responsible for its maintenance and operation. The light and radio station have since been automated. Addition of a radio station and helicopter service has made the lighthouse the Coast Guard’s principal communications center in Southern California, as well as the base for numerous rescue operations. It is one of the biggest and brightest lights along the coast of California. Point Vicente Lighthouse Tower is closed until further notice due to maintenance issues. The grounds and exhibit room are  open during scheduled open houses.

The Point Vicente Lighthouse is open for tours on the second Saturday of every month from 10 am to 3 pm.. The lighthouse and grounds are Federal Property owned and operated by the United States Coast Guard. For more information visit www.vicentelight.org

For the romantically-inclined, there are several legends attached to the lighthouse. Most famous is that of the ghost lady who, having hurled herself into the same sea that took her sailor sweetheart, walks the tower every night awaiting his return. Explanations that the phantom is caused by reflections from the huge lens have done little to dissuade lovers from joining the lady in her somber watch.