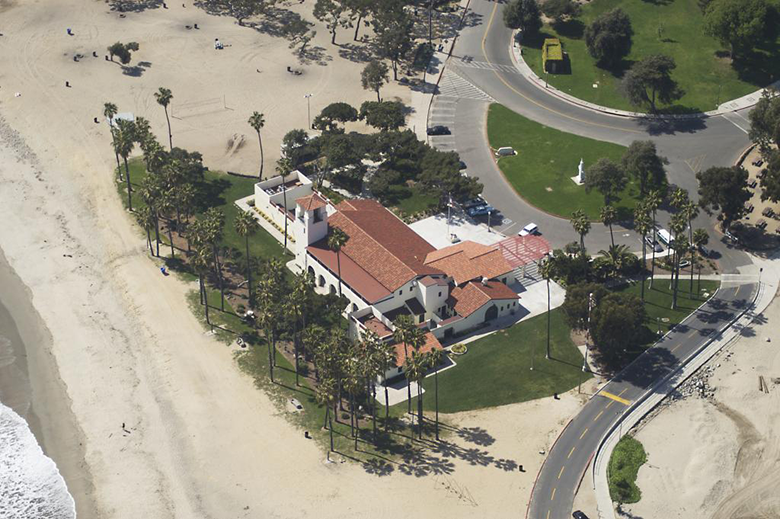 This 1932 Mediterranean-style structure was the last of the bathhouses built in Southern California, and was at the end of the “Red Car” (streetcar) line running from Los Angeles to San Pedro and out to Point Fermin. In the days before everyone had automobiles, people from the inner city would travel to the beach in this manner, and patronize the Bathhouse, where they could pick up a swimsuit and a towel for a ten cent rental fee and enjoy a day at the seashore. The 26,000 square foot building incorporated shower rooms, life guard facilities, snack bars for the beach-goers, and a community meeting room upstairs.

For more than 40 years, the bathhouse was an integral part of marine activities at Cabrillo Beach, including the creation of the Cabrillo Beach Museum (which is now the Cabrillo Marine Aquarium). However, in 1981, the structure was no longer able to meet the area’s growing program needs, and it eventually deteriorated.

In the years since, various civic groups have worked to get the bathhouse restored. With support from city agencies and other entities, the facility has been returned to its former glory (including 1930’s era colors, freshly polished floors, and new light fixtures), and improved to meet current building standards, including Americans with Disabilities Act compliance, installation of an elevator and automatic restroom doors, fire safety, and other structural improvements.

The Dedication Ceremony on October 2, 2002, coincided with the 70th anniversary of the bathhouse, which originally opened in 1932 and with the Cabrillo Beach Boathouse, which was used for boating events during the 1932 Summer Olympic Games, hosted by Los Angeles.

The project to restore the historic Cabrillo Beach Bathhouse was a $3.5 million joint venture involving the City of Los Angeles departments of Recreation and Parks, General Services, Public Works – Bureau of Engineering, and the Harbor Department/Port of Los Angeles, which provided the largest portion of funding ($2.1 million) for the renovation. Another large funding source ($1.15) was Proposition G, a state seismic bond, money that was used for earthquake safety retrofitting.