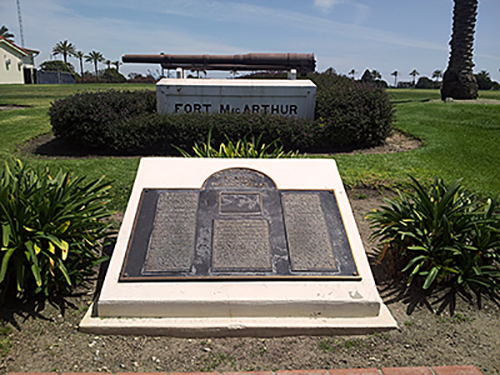 This area was the center of the early shipping activity in the harbor. In 1796, Father Lasuen built an adobe shelter here, where the present post engineers building now stands. During the Mexican-American War (1845-47), Commodore Robert Stockton used the area for storage of ordnance and supplies for his march on Los Angeles. Later the site of a customs warehouse until 1880, it was commissioned as a military reservation in 1888, in order to protect the port and to halt encroachments by railroads and local government, and developed for military purposes shortly before World War I. It is named in honor of Lt. Gen. Arthur MacArthur, father of Douglas MacArthur, who later commanded American forces in the Pacific during World war II.

At present, Fort MacArthur serves as a residential community for personnel of the Air Force Space Division Based at El Segundo. Not open to the public. Located on Pacific Avenue, between 22nd and 36th Streets, San Pedro. If the parade grounds look familiar they have been used for film location in such films as the 6 part mini-series Eternity.