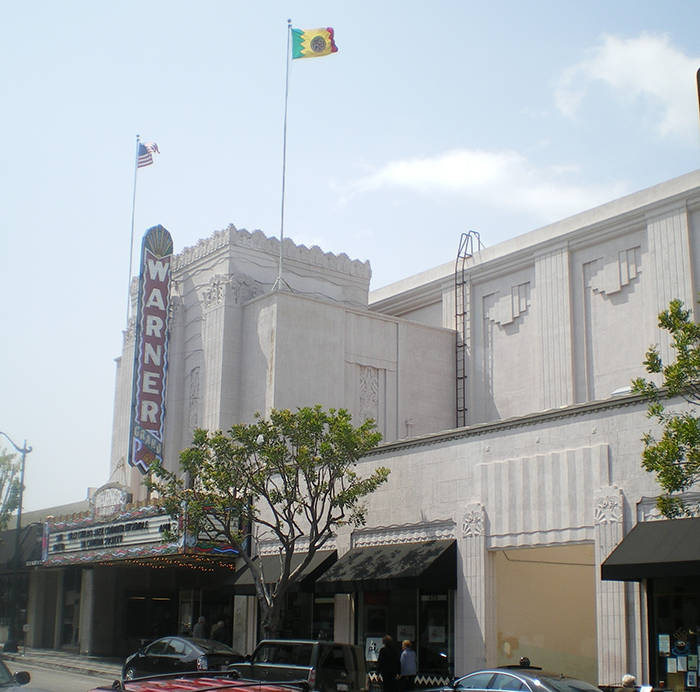 This lavish Art-Deco theater was originally opened to the public on January 20, 1931 with a star-studded gala premier. It was designed by B. Marcus Prieca who had formerly been the “house architect” for the Pantages Theater chain. The Warner Brothers hired the architect to build three lavish Art-Deco Palaces located in San Pedro, Beverly Hills and Huntington Beach, California.

The Warner Grand Theatre is the last of the three original theaters left intact. It is one of the few remaining theaters of its kind anywhere. It boasted an opulent lobby with decorative ceilings, etched glass chandeliers and colorfully-tiled fountains. A double staircase led to equally ornate mezzanine lounges. The auditorium included such details as floral stenciling on the ceilings, period lighting fixtures, lavish organ screens, and a curtain featuring a castle rising from the sea, in keeping with the theater’s billing as “The Castle of Your Dreams”. It was the first sound-equipped theater in all of the South Bay. As with virtually all of the theaters of that day, it was designed to accommodate traveling vaudeville circuits with a full stage house, orchestra pit and basement designed for dressing rooms, but unfortunately stage performances were never pursued under the Warner Brothers flag.

The Warner Grand theater had been in physical decline for over thirty years. In 1996, the City of Los Angeles and its Community Redevelopment Agency purchased the Warner Grand for $1.2 million. Today, the Theatre is managed by the City of Los Angeles Department of Cultural Affairs and is home to regular foreign and classic film series, musicals, plays, concerts, graduations and many other events. Active restoration is underway and the Warner Grand is well on the way to being returned to it’s former glory. It is being preserved for generations to come. The Warner Grand has, since 1985, welcomed film and video shoots.

The Grand Vision Foundation is a non-profit organization that is promoting the restoration, preservation and revitalization of the Warner Grand Theatre. If you would like further information regarding the foundation, visit the Grand Vision Foundation website or phone 310-833-4813. For a current listing of events at the Warner Grand, visit www.warnergrand.org or the San Pedro Community Events Calendar

Located at 478 West 6th Street in San Pedro, parking is available on 6th Street and also in a well-lighted outdoor lot on 7th Street, just “below” Pacific – this lot has a direct walk-through to the Warner Grand Theater, and provides ideal and ample parking. A public parking lot is also available on 5th Street. Exit Harbor (110) freeway at Gaffey, turning left onto Gaffey. Turn left at 6th, continue 2.5 blocks. The Warner Grand will be on your left, just after you’ve intersected Pacific at the traffic light. Carpool with friends and save energy!