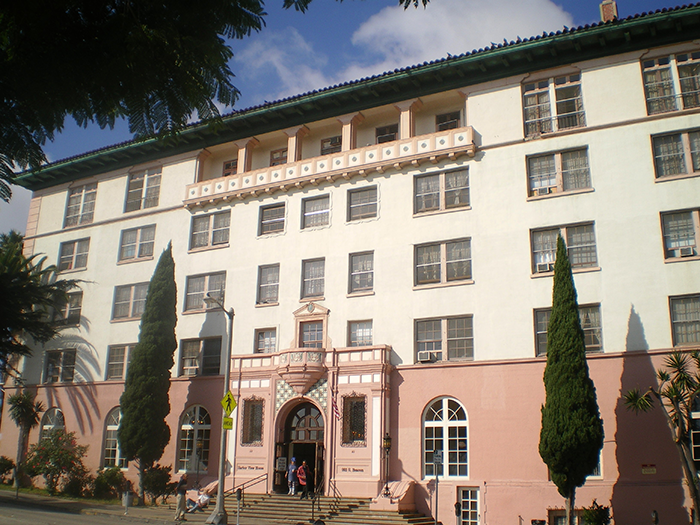 By Los Angeles (Own work) [CC BY-SA 3.0 or GFDL], via Wikimedia Commons

In 1919, when the San Pedro Y.M.C.A. was founded, its mission was to provide athletic and social activities for the Army personnel at Fort MacArthur. By 1926, with the construction of an additional breakwater allowing more Navy ships to anchor in San Pedro bay, the small frame building on North Harbor Boulevard was no longer adequate. The new facility, a five-story Spanish Colonial Revival style structure on the bluff overlooking the harbor’s main channel, was known as the Army and Navy Y.M.C.A. With 300 dormitory rooms, a gymnasium, running track, banquet room, patio, pool, boxing and wrestling rooms and a coffee shop, the Y.M.C.A. was a hub of activity. During World War II, it provided recreation and temporary quarters for over four million men. Celebrities such as Bob Hope and Lucille Ball stopped to entertain on their way overseas. In 1947, the Y.M.C.A. changed to a “civilian” organization, and dormitory rooms began to be booked by young travelers and senior citizens. In 1958, the Y.M.C.A. moved to its present facility. The Beacon Street building was purchased in 1967 for use as temporary housing for the homeless mentally ill, and is now known as Harbor View House.
Now empty this building is awaiting it’s next phase.