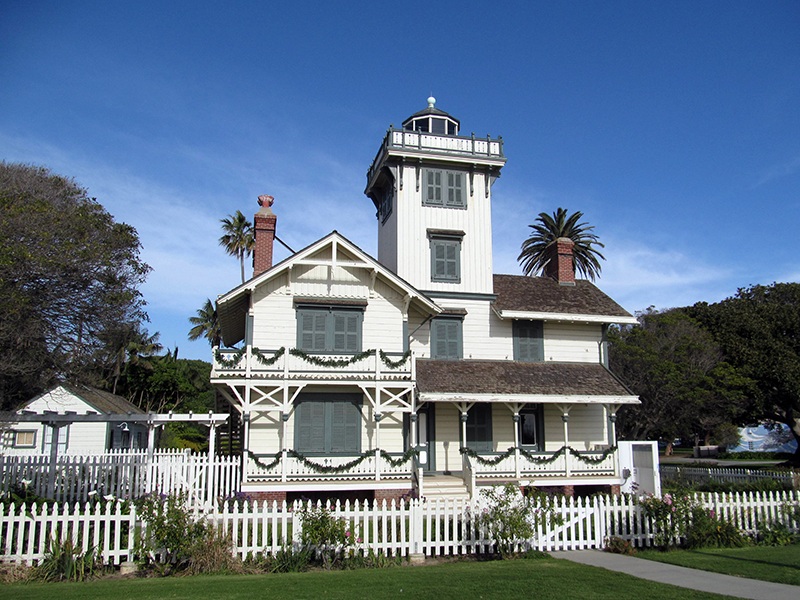 Built in 1874 with lumber from California redwoods and a Fresnel Lens brought around Cape Horn by sailing ships. For its time, this Victorian lighthouse was a palatial structure, crowned with a cupola fitted with a 2,100-candlepower light. Miss Mary L. Smith, the first, lighthouse keeper, lived with her sister, but they gave up the lonely occupation because there were no other settlers nearer than Wilmington. In the 1880’s, when Captain George Shaw was keeper, the lighthouse was the scene of many parties.

In 1898, a petroleum vapor incandescent lamp was installed; then, in 1925, a new 6,600 candlepower electric light which projected a beam 22 miles out to sea. Because it did not have a fog-signalling apparatus, it was a one-keeper station until 1941 when all coastal lights were extinguished as protection against enemy attacks. The lens lantern and gallery were replaced by an ugly lookout shack which remained for the next thirty years.

After the war, the light remained off, and radar and direction finders took over sentry and signaling duties. The structure fell into disuse and disrepair until a new lantern and gallery were built by volunteers, restoring it to its original charm just in time for a centennial celebration in 1974. Today, Point Fermin Lighthouse is one of San Pedro’s most recognized landmarks and was used for the San Pedro Centennial logo.

This graceful Victorian-style building surrounded by colorful flower gardens, is one to the oldest lighthouses on the west coast. It was built in 1874 and served as an aid to safe passage between the Channel Islands and into the harbor for nearly one hundred years. The land for the lighthouse was donated by Jose Diego Sepulveda.

General admission is free; however, a donation is requested for each visitor. Children under the age of 18 must be accompanied by an adult and children less than 40 inches in height may not be admitted to the tower. For more information please call: (310) 241-0684.

Due to the recent Coastal Landslide you will not be able to go through Paseo Del Mar from Western Avenue, however you can get to the Lighthouse going south on Gaffey Street or take Pacific Avenue south till it ends at Shepard Street. Take a right on Shepard Street and a left on Gaffey Street.