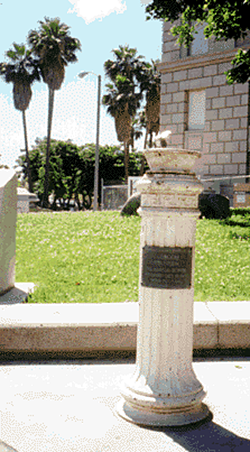 Since seafaring began, fresh water has always been in short supply. There was no shortage of other beverages to quench the thirst of local and visiting seamen, but paradoxically, these beverages tended to create true thirst which could only be relieved by plain water. Since saloons at the time did not offer water, various good townspeople, hoping to promote temperance as a spinoff, financed the establishment of public drinking fountains in strategic locations. One of the most visible in early Downtown San Pedro was situated on Beacon Street in front of the Bank of San Pedro. Crafted in the period when cast iron became popular as an art form, in the 1870’s, it served the public for approximately 80 years. When the Beacon Street redevelopment project began demolition, this sturdy yet graceful fountain was found abandoned in the gutter near its original site. It was rescued and later donated for installation in the mini park in 1980. The location is a short distance from its original position, and very near the site of the Old Pepper Tree Saloon. It still gushes forth with fresh, clean water.